Why do systems for responding to concerns and complaints so often fail patients, families and healthcare staff? A qualitative study

Concerns and complaints raised by staff, patients and families can help healthcare organisations identify problems and improve the quality and safety of the care they provide.

However, a series of inquiries and reviews have found that, too often, those who raise concerns or complaints are not listened to, and that the system for resolving these issues is inadequate. This can lead to frustration and scepticism about the value of the complaints process.

The team undertook 88 interviews with people raising and responding to concerns and complaints about quality or safety in six NHS organisations – three acute hospital trusts, two community and mental healthcare trusts, and one ambulance trust.

The interviews explored what had led to concerns or complaints being raised, how they were handled, and what the consequences were.

Many interviewees shared a sense of frustration and disappointment in the processes they experienced when raising concerns or complaints about quality or safety of care. They found the complaints systems difficult to interact with and often poorly equipped to deal with their concerns. Many felt that they were dismissed, and that they had to put in a lot of effort to ensure that their concerns were taken seriously.

They described the complaints systems they encountered as poorly thought through and poorly resourced, and found that the process moved very slowly, with the onus being on the complainant to keep things moving.

A key issue was that there was often a mismatch between what patients, staff and families wanted out of concerns and complaints systems, and what those systems were designed to deliver.

This research highlights that many NHS concerns and complaints systems are able to process simple issues that can be categorised and addressed relatively easily, but can struggle with more complex concerns, especially those that cover multiple areas of care or multiple interactions between different people. This often results in concerns and complaints being processed in ways that disappoint those who raise them, and resolutions that fail to address the issue or miss the main point of the complaint.

Systems need to allow for dialogue that enables staff, patients and family members to voice their concerns in their own terms, and allows organisations to work with them to identify the best way of resolving concerns.

There are some examples of how organisations have looked to address this issue, such as having dedicated liaison officers to help people navigate concerns and complaints systems, and to ensure that their concerns are treated holistically. This kind of intervention could help make sure that issues are dealt with fully, with benefits for both healthcare organisations and the patients, family members and staff raising concerns. 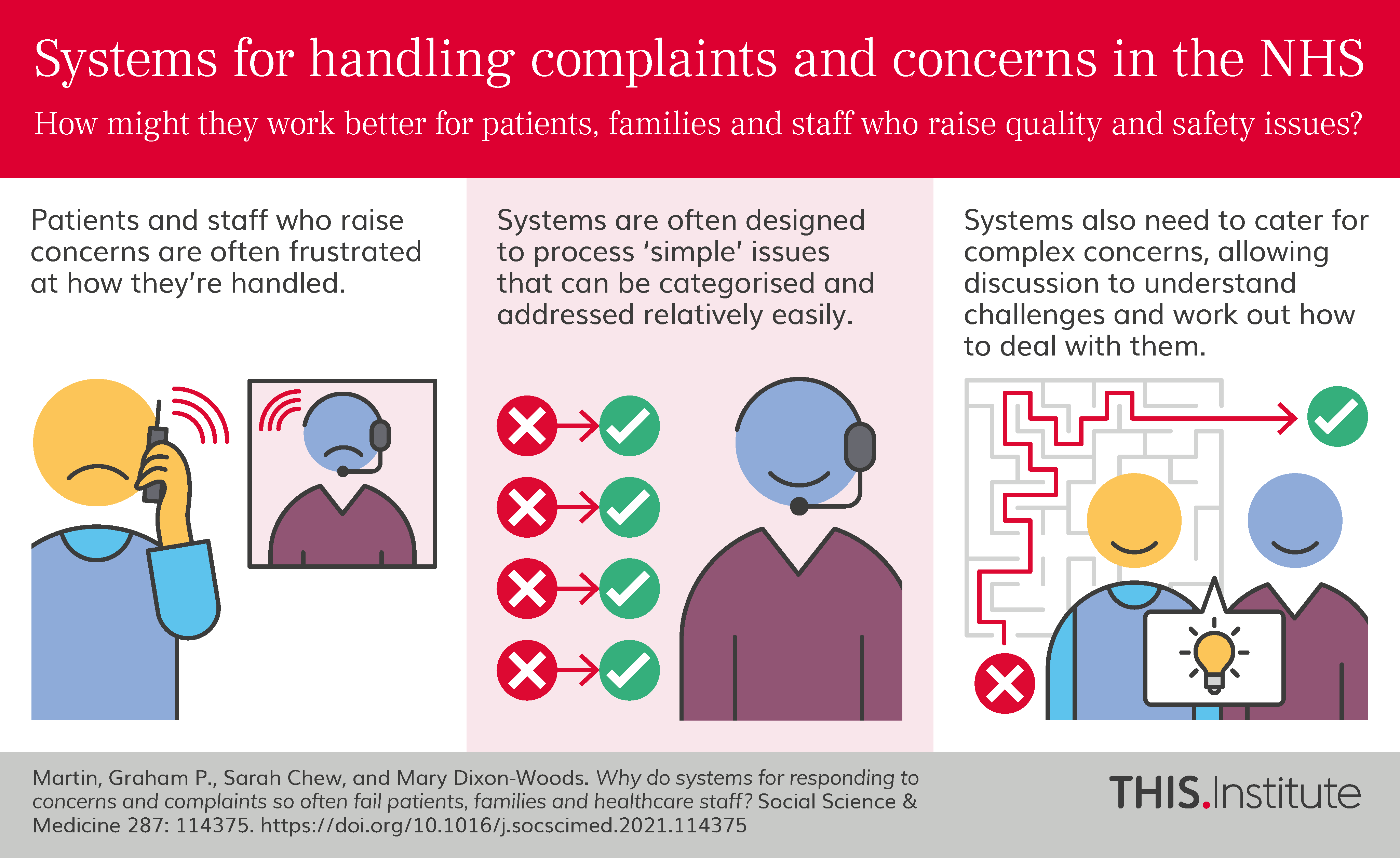 Uncovering, creating or constructing problems? Enacting a new role to support staff who raise concerns about quality and safety in the English NHS

How not to waste a crisis: a qualitative study of problem definition and its consequences in three hospitals

But ultimately we want our work to have impact. So if you’ve got a use in mind but you’re not sure it’s allowed, just ask us at enquiries@thisinstititute.cam.ac.uk